One of the world’s most famous travel destinations, Kenya is renowned for its remarkable diversity of landscapes, animals and cultures. From vast plains to snowcapped mountain summits, Kenya provides a striking backdrop for Africa’s most classic safari adventures. Therefore, while on your exclusive Kenya safari witness the Great Migration in the Maasai Mara.

Explore the remote reaches of Kenya’s parks and enjoy day and night drives and bush walks in exclusive private reserves. The fabled Maasai Mara is the Kenyan side of Tanzania’s Serengeti.

Wildlife is prolific here any time, but nothing tops the Great Migration, when nearly two million wildebeest and zebra follow the rains to new grass. The region is also the traditional home of the Maasai, nomadic pastoral herders.

Through the game drives with a good camera, meet the tremendous biodiversity which includes 25,000 different animal species. In the Maasai Mara, the plains darken during the annual wildebeest migration, with predators in stealthy pursuit.

The reserve has plenty of cheetah but is above all the Lion Kingdom, with large prides holding court. Other carnivores include spotted hyena, jackal and bat-eared fox.

The Mara is home to large grazing herds of zebra, giraffe, buffalo, gazelle and topi. Hartebeest, water buck, dik – dik, duiker, klipspringer, oribi and the rare roan round out the antelope varieties. Crocodile and hippo are thick in the Mara and Talek rivers, while the acacia woodlands shelter 470 of Kenya’s 1100 bird species.

Amboseli National Park, famed for elephants, also has some endangered rhinos, which are seen more often at Lewa Conservancy, a project devoted to their recovery. Visitors to Samburu may see leopard and two endemic species found only in northern Kenya: Grevy’s zebra and the reticulated giraffe.

Invest in a good SLR camera and a couple of lenses. The best camera set up for wildlife photography includes at least a 300mm lens, because anything less will just be frustrating.

Ideally you should have 2 cameras as changing lenses is time-consuming when you might be missing the action. On top of that, dust tends to get into the sensor when changing lenses, and this shows up as spots on your photos. Always bring a flash for night safari photography.

Always bring a tripod for situations where you are on foot. Inside the vehicle, however, a tripod tends to be clumsy. It could be replaced by a suitable clamp with tripod head, which is great for panning and following action, but slow to move around for different positions.

A better option in most situations is a beanbag, which you can bring to the country empty to save weight, and fill it up with rice or beans after you arrive. Some pillow covers or laundry bags are invaluable to protect cameras lying around in the car from dust.

One of the main African safari photography tips for wildlife is to always bring enough memory cards.

As wildlife photography offers lots of opportunity for action photography, you’ll end up shooting a lot of frames and filling up a lot memory space. I prefer to have big memory cards that can hold a full day’s photography.

Nothing is more frustrating than having to change cards in the middle of the action. At the end of the day, I download the cards on my laptop and make a back-up on an external drive. I then format the cards to use again the next day. If you don’t travel with a laptop, you should still back-up your memory cards on a suitable device.

It is important to get to grips with the basics of photography and understand the relationship between aperture and shutter speed. This will enable you to freeze action and avoid camera shake, as well as to manipulate the depth of field. 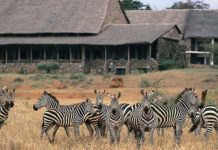 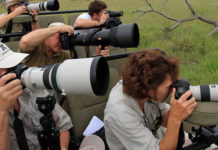